Through our citizens' petition, Templergraben will be car-free for four months on a trial basis starting June 18. Together with the AStA, the city of Aachen and many other student & urban initiatives, we want to revive the car-free Templergraben. Join us!

Now the time has finally come: the car-free Templergraben will be tried out in a real lab for four months starting June 18!

In the coming months, we show the positive effects on the sorrounding area and what is possible there if Templergraben remains car-free. If you want to participate - as an initiative or individual, you are invited to join!

We have demanded that Templergraben between Schinkelstraße and Wüllnerstraße - i.e. in the area of the main building, the SuperC and the Kármán - be traffic-calmed, through a network separation for motor vehicle traffic in this area. Of course, public transport and delivery traffic will be excluded.

Possible evasion traffic on Annuntiatenbach and Jakobstrasse should also be taken into account.

What happened to our claim?

On June 1, 2020, we submitted a citizens' petition and started an online petition, which was signed by about 2500 Aachen residents. In addition to the ADFC, the VCD and U.U.M., this demand was also supported by various clubs, organizations, restaurants and stores on Templergraben.

Our demand was discussed at the citizens' forum on September 1, 2020. On September 3, the Mobility Committee of the city of Aachen decided to conduct a living lab at Templergraben.

Starting June 18, 2021, the car-free Templergraben will be tried out for four months in a living lab.

Discussions about the Templergraben in the past

The idea is actually not so new - since the nineties, this idea has been circulating in the city and has since been demanded by associations and RWTH.

Also when the Templergraben - completion in 2014 - was rebuilt, the question of mobility arose. The political debate at this time was to achieve an "equal coexistence" (see Attachment 1 here) of all traffic participants. 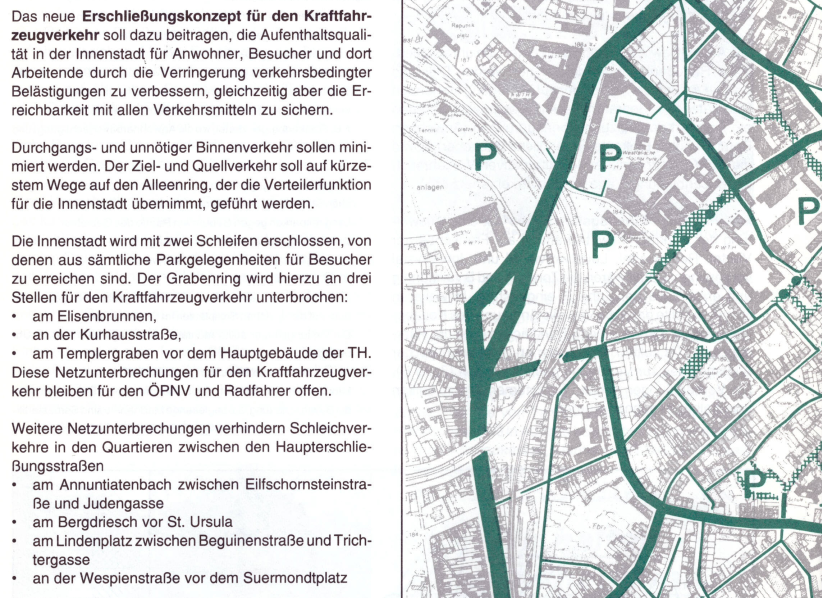 What is the current situation?

So far, this idea has failed due to the will of politicians - in the end, only a speed limit of 30 km/h was implemented. Unfortunately, a relaxed and equal coexistence of all traffic participants does not take place there: Especially during rush hour, this is a popular alternative route for motor vehicle traffic (so-called rat running). This makes it difficult for pedestrians to cross the street. Due to the long tailbacks, buses are also stuck and cyclists use the sidewalk - because there is no bike lane or protective lane here.

The Templergraben is regularly closed for events - without any significant negative impact on traffic. 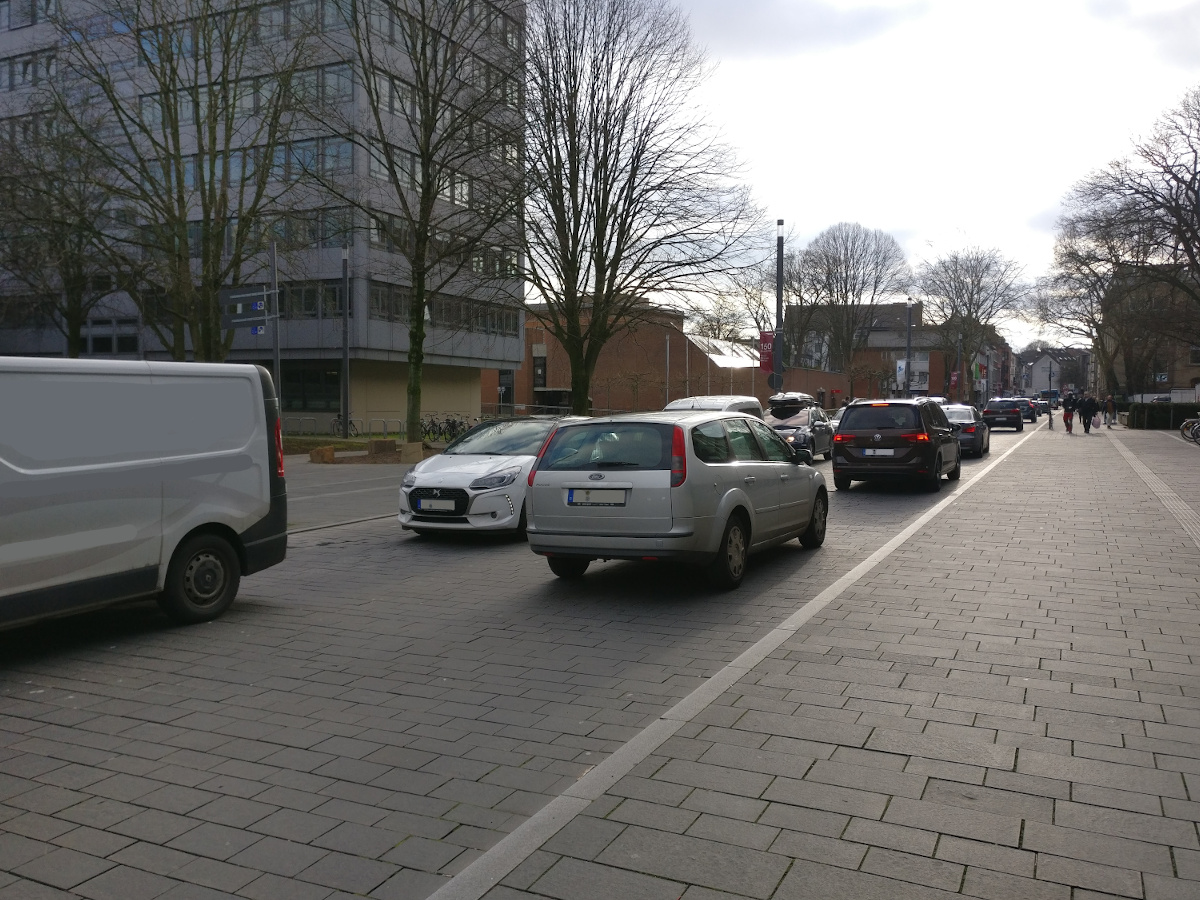 On a campus, public space should be divided up differently.

Hasn't the Kármán been closed?

Despite the closure of the Kármán Auditorium, a lot of student traffic takes place here - traffic calming would increase the quality of stay. The development of Campus Mitte is also a concern of RWTH - there are already announcements and concrete plans for the redesign of the Kármán forecourt.

A calming of the Templergraben and the new character would help the university and the city continue to grow together, both intellectually and spatially. 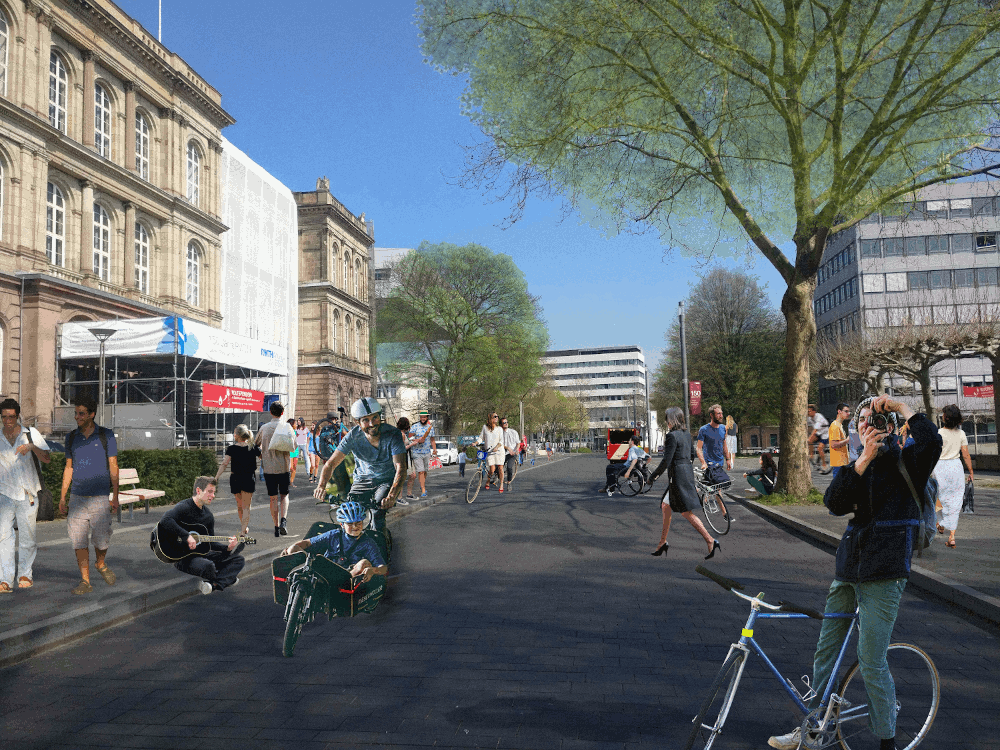 This is how we imagine the Templergraben in future!

Who profts besides the students?

Not only students would profit. Through traffic calming, there would be improvements for pedestrians, bicycle traffic and public transport in the immediate sorroundings:


Less traffic on the Grabenring means less noise pollution and higher air quality for residents. Public transport would also be strengthened in the wider city center.

How useful is that?

Following the success of the Radentscheid - a public petition for better bicycle infrastrucure signed by about 40.000 citizens, politicians are discussing how to make the Grabenring attractive for bicycle traffic. The city of Aachen is currently planning and building a bicycle priority network - the Grabenring is to serve as a distributor for this. 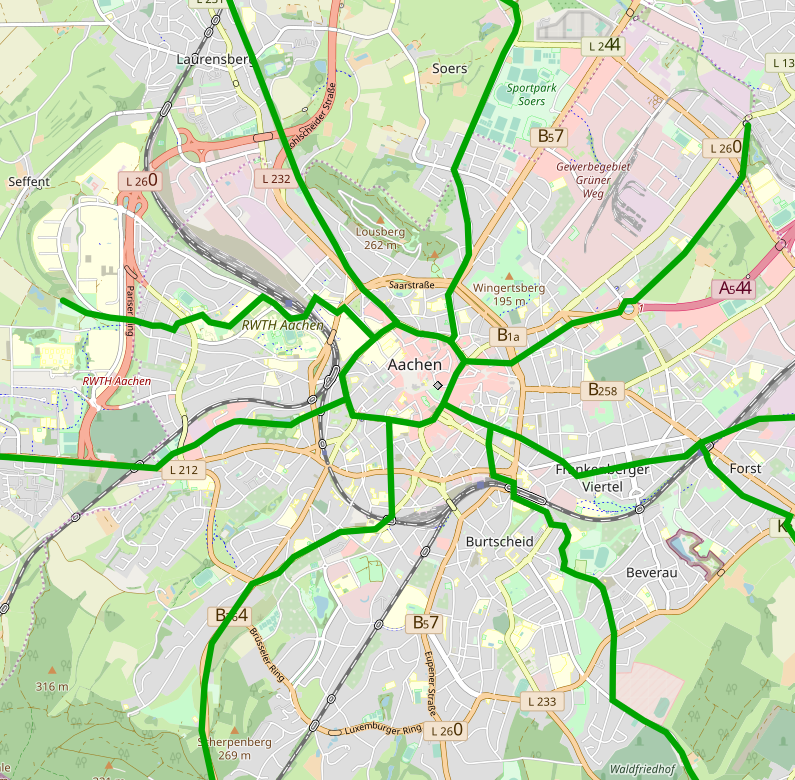 Traffic calming of the Grabenring

In 2017, the ADFC already made some proposals for "loop development" of the Grabenring. With this concept, all destinations in the city remain accessible by car, but through traffic is shifted to the main roads. The redesign of the Templergraben would be the first measure to implement this vision, from which important lessons can be learned to strengthen cycling and public transport.

It would also be a clear signal towards a traffic turnaround in Aachen as well as a commitment to Aachen's declaration of climate emergency in June 2019.

Multiple such network cuts - as already done at Elisenbrunnen - could relieve congestion in other parts of the Grabenring.

University parties and party youth organizations are also in favor of our citizen petition.